For centuries, many viewing a map of the Atlantic Ocean have observed the manner in which the coastlines of the western and eastern hemispheres appear ideally suited to fit together like puzzle pieces.  Of course this was dismissed as mere coincidence.  After all, everyone knew that land could not move.  So, the idea was seen as insignificant.
That all began to change in the twentieth century as the theory of plate tectonics was developed and later confirmed.  We gradually realized that the solid immovable earth beneath our feet was not as stable as it appears.  Armed with this new understanding of continental drift, scientists  have discovered evidence of this phenomenon all around the world.  In fact, we now know that throughout the ages some, and at times all, of the continents have converged into a super continent and then dispersed. 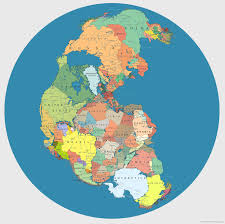 Most of the time, the movement is so slow that it occurs without notice.  However, when pressures build along convergent lines, the sudden release of tension can result in earthquakes tsunamis and volcanic eruptions.    Entire mountain ranges are attributable to the compression and upheaval of regions of our planet’s surface.
What is true of tectonic plates is equally evident in our cultural development.  We tend to think of our sense of reality as a static perception.  Nonetheless, subtle shifts in our collective perspectives are continually occurring. Frequently these transpire without our conscious awareness.  Yet, there are times when the tension between opposing views generates open turmoil.
Consider the issue of slavery.  For eons people accepted it as a normal aspect of social structure.  Often the spoils of war included the enslavement of defeated warriors and their families.  Though historical records demonstrate that periodically individuals spoke out against the practice, the concentrated effort to end slavery did not begin in earnest until about 300 years ago.  Now the idea is viewed as absolutely abhorrent and there is an international effort to end all forms of illegal human trafficking
Consider the Significant transformation of social attitudes that have occurred over the past one hundred years.  Public opinion regarding women’s rights, child labor laws, same-sex marriage, drunk driving, and smoking in public places have all undergone significant transformations and established new cultural norms.  Clearly ideas are as subject to quantum shifts as any form of matter.
So much of the hostility we witness around the world is due to fear of the changes that are transpiring.  ISIS is a clear example of the fear fundamentalists of all religions are experiencing as they watch modern scientific information and contemporary culture erode their antiquated conceptions of reality.  The strong conservative political effort demonstrated in the recent presidential election depended heavily on fear about the cultural changes that are taking place in our nation.  Although the fearful may be engaging in valent efforts to stem the tide of modernity, eventually rational knowledge will prevail over ignorance.
What new ideological transformations lie in our future?  How would our world be different if the accumulation of extreme wealth was viewed as a crime against society instead of being admired?  What will happen when the demographics of our nation change over the next fifty years and white privilege is no longer a reality?
Yes, change is inevitable, and numerous   questions face us. How peaceful will those transitions be.  Are we willing to participate in the process?  What will be the consequences of allowing others to direct our global future?

“Never doubt that a small group of thoughtful, committed citizens can change the world.
Indeed, it is the only thing that ever has.”
-Margaret Mead