Has the World Gone Crazy?

As we scan both national and global events, we may find ourselves overwhelmed by the apparent insanity that is unfolding all around us.  The tragedy of this situation is compounded by the fact that scientific research indicates that human consciousness appears to be the most extraordinarily complex and sophisticated entity the universe has produced thus far.  Do the current conflicts indicate that we have reached the height of our development and are engineering our species’ extinction?  Or, is it possible that we are witnessing a tumultuous transition from conflicting world views that were conceived in pre-scientific cultures towards a more contemporary understanding of our humanity?
In the previous post, Our Creative Universe, I presented six cosmic factors that serve as categories for every occurrence in the universe, repulsion, attraction, chaos, organization, entropy and complexification.  Inasmuch as we are expressions of the universe, our social interactions can be similarly grouped into six social factors that can be easily identified and understood, alienation, attraction, conflict, social bonds, egocentrism and altruism. 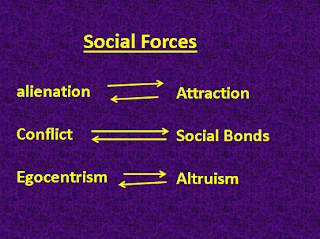 This model provides an effective way to recognize the nature of our own behavior as well as that of others.  Although life’s events may appear perplexing at times, learning to recognize what is going on can aide in developing more objective and rational strategies.  In reality, it’s not as complicated as it may seem.
The last few posts have been rather lengthy, so I am only going to address the items on the left side of the illustration at this point.  They are the destructive factors that prevent and destroy cohesive and harmonious social relationships. I will present the creative factors in subsequent posts. 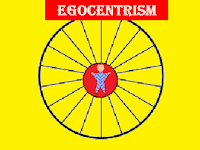 Without doubt, egocentrism is a greater barrier to our cultural evolution than any other factor.  Its manifestations run the gamut from the temper tantrum of a toddler to the severe brutality of a dictator.  It lies at the heart of every conflict and generates and sustains the full range of alienation.  When people assert that “nothing ever changes”, that sentiment is generally directed towards the destructive behaviors associated with extreme forms of selfishness. 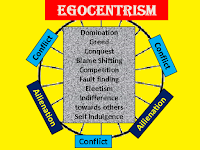 For a young child who lacks the knowledge and ability to provide its own necessities, it is developmentally appropriate to be self-centered.  We expect wild animals to engage in acts of self-preservation.  Yet when we observe similar attitudes and actions in adults, we recognize that it represents a serious character flaw.  The list of divisive attributes of egocentrism are limitless.

Unfortunately, it is easier to recognize egocentricity in others than it is in ourselves.  From our perspective, we are not self-centered, we are merely independent.  Certainly, individuality is highly valued in our culture, but from a holistic view, is that really a virtue?
Should we admire the rich and powerful?  Are those praiseworthy who amass their fortunes through the labors of the middle and lower class by withholding employment benefits and adequate compensation? Should we compliment the giants of corporate America who control energy, healthcare and other essential goods and services, forcing families into voluntary slavery while the executives indulge in unbounded opulence?
No, I would suggest that those who engage in brute capitalism foster the poverty they distain and are actively engaged in crimes against society.  We need to recognize extreme wealth for what it is, pure selfishness.    The frustration and anger of the working class and poor are understandable and probably justified.  We can only hope that an equitable redistribution of resources can eventually occur in a peaceful manner.
The religious conflicts and actions of despotic world leaders are no different.  They are further evidence of egocentrism.  Sadly, as long as people are willing to embrace the exaltation of individuals, candidates will vie for their place on the pedestal.
Albert Einstein offered us the key to a brighter future when he said, “No problem can be solved with the same level of consciousness that created it.”  Indeed, if the insanity is to end, we will need to view our existence from a completely new perspective. 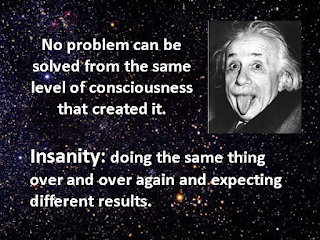