From the instant of the initial burst of energy that propelled our universe into existence, it has been engaged in a path of progressive complexification that has led to unbounded creative expressions.  There are several complimentary and opposing factors that have been instrumental in its development.  As presented in the illustration below, they are repulsion, attraction, chaos, organization, complexification, and entropy.  They manifest in innumerable ways, are ubiquitous and their influence is universal. 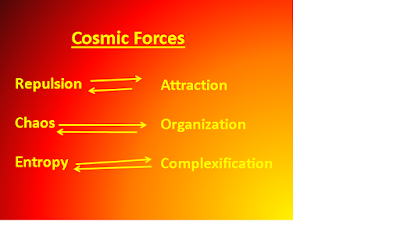 
If and when we focus that creativity on our social development, we will be able to transform our planet into the harmonious global community that has thus far existed primarily in our imaginings.  We must simply keep in mind that every, human accomplishment begins as a thought.  Those thoughts then become things.  There is absolutely no reason to doubt our ability to create a brighter future for mankind.  So, dare to dream.
Posted by Rick at 4:57 PM